What Renesas Semiconductor must do NOW?

Immediately Reinstate Wan Noorulazhar, the Union President, ...(no need to wait for the completion of the wrongful dismissal case)

Immediately STOP challenging in court the recognition of the Electronic Industry Employees Union Western Region, Peninsular Malaysia (EIEUWR) [Note the Union was successful in the secret ballot, proving that 72.69% of the employees want this Union to be recognized, the Minister accorded recognition,...BUT RENESAS is challenging this, and recently the High Court also allegedly ruled against Renesas(will circulate judgment once obtained) - These workers have been denied their UNION rights since 2010. In Malaysia, recognition is a pre-requisite before Collective Bargaining Agreement can be negotiated and entered into between RENESAS and the UNION...) 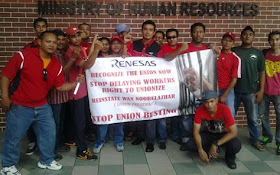 KUALA LUMPUR: An electronics company has been found guilty of union busting by the Industrial Court.

She said employers were lawfully bound to respect a worker’s right to engage in unionism and also they can participate in the lawful activities of a union.

She added that employers were also ethically and morally constrained from interfering with the affairs of a trade union and the right of workers to organise, discriminate, restrain, or coerce against any worker because of legitimate trade union activities and abuse authority in any form.

Mary Shakila said this in the complaint of union busting brought by the union against Renesas for breaching Sections 4(1), 4(3), and 5(1)(d)(i) and (ii) of the Act.

In her 49-page award dated March 8, Mary Shakila said a Renesas employee, Wan Noorulazhar Mohd Hanafiah, was elected as pro-tem president of the union but he was told by the plant director that he “was not to promote the establishment of a national/regional wide union for the electronics industry” as the company would be forming an in-house union.

The union submitted a claim for recognition from Renesas on Jan 18, 2010 but the company refused to grant it.

A month later, the company organised a seminar on the setting up of an in-house union which was attended by members of the Joint Consultative Committee (JCC) in the company at Cyberview Resort & Spa.

Mary Shakila noted that the timing of the seminar left “a lot to be said” as to the motives of Renesas.

Wan Noorulazhar alleged he was offered the role of president in the proposed in-house union, which he declined, resulting in him being made to perform tasks below his job grade and being monitored by the Human Resources Department via CCTV.

He was later dismissed in 2011 after a domestic inquiry found him guilty of misconduct for allegedly maligning Renesas Semiconductor publicly on his Facebook page. Wan Noorulazhar is challenging his dismissal in the Industrial Court.

While Mary Shakila refrained from passing comment on his case, she noted that his termination was “manifestly a union-busting tactic”.

In evaluating the evidence, she said that the company’s witnesses, all still serving in the employ of the company, “are not to be believed.”

“The court is satisfied with the veracity of the union’s witnesses and their evidence, some of whom are still employed by the company and have risked their jobs to testify against the company.” - Star, 12/3/2016
at 09:02
Share