Azalina Othman, not voting as party 'orders' is NOT Party Hopping? Neither is being 'expelled' from your party?

Anti-Party Hopping laws, are about the people and their elected peoples' representatives.

As a matter of principle, elected representatives(MPs/ADUNs) must represent their constituents - but alas, many after elected seem to 'do as they please' or simply follow what their party bosses want.[How can MP/ADUNs that do not stay in communication even get instructions of the people they represent?]

So, we need to be careful about 'ANTI-PARTY HOPPING LAWS' - careful that political parties do not use such laws to further control their MPs/ADUNs freedom of speech, opinion and vote - so much so, many of these peoples' representatives FAIL to act the rakyat's representatives - but end up simply following their party boss orders.

The confusion shows itself in recent comments of Azalina Othman (and possibily other politicians) - AND THE PEOPLE NEED TO FOCUS THAT WHAT THE PEOPLE WANT IS NOT DE-RAILED BY POLITICIANS/PARTIES FOR THEIR OWN ENTEREST.

An automatic disqualification for MP/ADUN when he leaves his political party, and joins another or become an 'Independent' - then there will be a BY-ELECTION, an opportunity for the people to pick the same or another to be their 'wakil rakyat'  [Of course, if the party expels an MP, there will be no automatic disqualification unless the expelled MP goes and join another political party. We do not want to give political parties the power to get rid our 'peoples' rep' simply by expelling him/her - this will also give political parties more power to deny MP/ADUNs their freedom of opinion and/or vote] 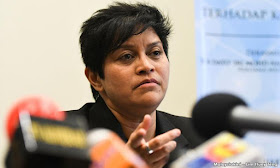 I would address some of the points made in the media.

"not following the party's instruction and taking an individual stand in any voting called in Parliament" is certainly not 'party hopping', and it certainly should not be a wrong or a crime. MP should be free to vote as he chooses

On examples of party hopping, Azalina (above) said this includes "not following the party's instruction and taking an individual stand in any voting called in Parliament".

Let's not forget that a Member of Parliament is the peoples' representative, and as such his/her vote must be the vote of the people he/she represents - the constituents. It cannot be as what his/her political party 'INSTRUCTS'.

In Thailand, the House of Representatives has 500 members, all of which are democratically elected: 375 members were directly elected through single constituency elections, while the other 125 are elected through party-list proportional representation. In this case, the 125 who came in through the party-list proportional representation reasonably have to do as their respective party instructs, but not so for the 375 Parliamentarians that were chosen by the constituents.

Malaysia has no party-list proportional representation, - hence no issue of MPs following party instructions. Of course, MPs can take into consideration party views but that is all.

A de-registration of a political party is definitely not 'party hopping'.  Remember the government of the day can abuse the law to get rid all Opposition MPs by a simple act of de-registration.

The two other examples of party hopping referred to the more common practice of defection or an entire party being de-registered.

PARTY HOPPING is about 'AUTOMATIC DISQUALIFICATION', followed by a by-elections to choose again their 'wakil rakyat'. This needed added situations when an MP/ADUN becomes disqualified are:-

- When an MP(stands as a candidate for Party A) leaves the party, and becomes a member of another party, or becomes an Independent MP.

*** However, if a political party EXPELS an MP, and he then becomes an INDEPENDENT MP - this is not 'party hopping'.  But, if the expelled joins another party, then it becomes a disqualification.

Uganda's Constitution has this provision...

in Article(83) of their Constitution, where it is stated that ‘…a Member of Parliament may lose his or her seat in any of the following instances—

- On resignation in writing to the Speaker;

- If he or she subsequently ceases to qualify to be a Member of Parliament;

- If he or she is absent from 15 sittings without permission of the Speaker;

- If he or she is found guilty of violation of the Leadership Code of Conduct;

- If he or she joins another party or leaves the party and decides to remain an Independent member;

- If a member was elected as an independent and joins a party; or

Resolution On ‘Party Hoping’, Removal of MPs and Restoration of Peoples’ Rights in determining who their peoples’ representative MPs and ADUNs are at all times.(watch out for upcoming posts, where we will share the contents of this Resolution adopted by the lawyers in Malaysia)

Azalina is not all talk but action, and the fact that she has said that she will be tabling a Private Member's Bill on this matter ought to be complimented.

Why is the government SLOW in tabling a Bill on Party Hopping >>> Remember, that party hopping has happened in most parties, government and Opposition.

Azalina is also calling for 'Recall Elections', which is good but is different from disqualification by reason of party hopping, that results in a by-election for the people to decide again who exactly do they want to be their MP/ADUN ...Recall Elections will be discussed in a later post > it really is about the right of the people in a constituency to remove their 'wakil rakyat' just like MPs can remove a PM when they lose confidence in the then PM

Azalina answers FAQs on anti-hopping law
Published:  Aug 29, 2021 4:12 PM
⋅
Updated: 7:13 PM
Pengerang MP Azalina Othman Said has cited voting against the party line in Parliament as an example of an action that can be addressed in any new anti-party hopping law.

In a Facebook post, the former deputy Dewan Rakyat speaker responded to frequently asked questions on the proposed law.

On examples of party hopping, Azalina (above) said this includes "not following the party's instruction and taking an individual stand in any voting called in Parliament".

The two other examples of party hopping referred to the more common practice of defection or an entire party being de-registered.

In terms of preventing party hopping, Azalina reiterated suggestions for a recall election to force by-elections in seats where its elected MP had defected to another party.

Alternatively, she said a change of Malaysia's entire electoral system could see voters casting their ballots for political parties, instead of individual candidates running for a seat.

"The party will win a seat based on the overall percentage of votes garnered," she said.

Overall, Azalina argued that an anti-party hopping law will prevent the people's mandate from being sacrificed for individual interest, while at the same time avoid any sudden shock to power balance among political parties.

Azalina, a former law minister under BN's administration, had for many years consistently called for the enactment of an anti-hopping law.

Despite speculations behind her move to resign as deputy speaker, Azalina's name was notably absent from Prime Minister Ismail Sabri Yaakob's cabinet.

Following the announcement on Friday, Azalina congratulated deputy de facto law minister Mas Ermieyati Samsudin on her appointment, along with a reminder to prioritise the enactment of an anti-hopping law.

Mas Ermieyati won her Masjid Tanah parliamentary seat in the 14th general election on a BN ticket but defected to Bersatu shortly after Pakatan Harapan formed the government. - Malaysiakini, 29/8/2021

In a statement today, the Pengerang MP hoped the motion will be the “starting point” to introduce recall elections during the upcoming Parliamentary sitting.

“In addition, I also intend to propose the establishment of a ‘Caucus on Parliamentary Reform and Multi-Party Democracy’ among interested MPs,” said the former law minister.

"This is to strengthen the institution of Parliament in Malaysia and uphold parliamentary democracy in our country.”

She added that she was “very pleased” with the discussions between the government, the opposition bloc and the independent bloc to introduce a law to prevent party hopping.

Last week, Azalina suggested that one way of preventing elected representatives from defecting to another party is to hold recall elections under the proposed anti-hopping law.

In a frequently asked questions (FAQ) sheet on the proposed law, she said recall elections would allow the people to revoke their mandate given to an elected representative if he or she decides to switch parties.

In today’s statement, Azalina said leaders of her generation should accept the competition between political parties as something that benefits the rakyat if it is based on reasonable “rules of the game” and not meant to trigger splits within parties.

She added that instead of eliminating political competition, it should be fine-tuned so as not to cause hatred or chaos.

“For the progress of the country, the political leaders of my generation and the younger generation must be brave enough to agree on working towards making politics a professional career choice that is respected and revered, not reviled and scorned,” she said.

“The rakyat’s perception of politicians today is very embarrassing, and personally, I am upset with this situation.”- FMT, 1/9/2021